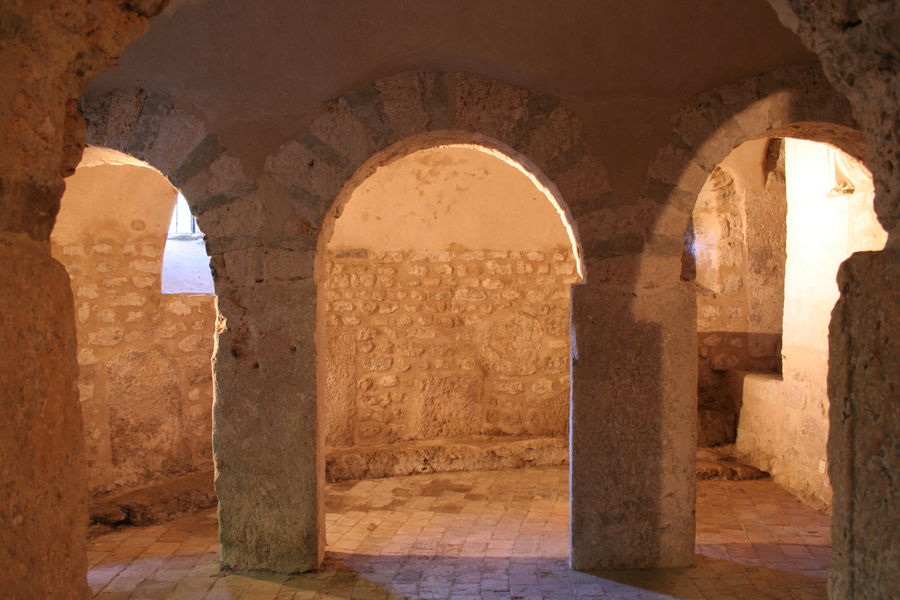 The Eglise du Bourget-du-Lac is attached to the priory and was built in various stages.
The crypt is the oldest part of the church, and dates from the 10th century. It was built on the site of a Roman temple dedicated to Mercury, whose inscribed stones can still be seen. It is in the Roman style, with alternating colours on the arches that support the vaults. Monks would keep relics in the crypt, and it is also the place where new monks would be baptised, until the baptismal fonts were moved to the nave of the church.
The church was reorganised in the 15th century, under the leadership of Aynard de Luyrieux (see leaflet on the priory). During this period, the church was raised, and a Gothic vaulted ceiling was built.
The latest modifications date from the 19th century. The Roman entrance was replaced by the current façade, the tribune (open arcade overlooking the nave) was built, the choir stalls were raised, the stained-glass windows were changed and the jube was dismantled and moved to the choir stalls.
As you enter the church, you will see on your right a decorated wooden door, topped by tapered archway, in the centre of which is a beautiful multi-coloured stone statue of the Virgin teaching, which dates from the 15th century (statue no longer visible).
On your left, you will see a magnificent rectangular 13th-century font, decorated with a series of sculpted angels.
As you walk down the nave, on your right, you will see a tombstone dating from 1482, and depicts a 'transi' of Oddon de Luyrieux. A 'transi' is a cadaver tomb, featuring the deceased in the form of a skeleton.
On your left, you will see various side chapels: the first is the chapel of baptismal fonts, the second is dedicated to Saint Laurent (the patron saint of the church) and the fourth is dedicated to the Virgin Mary. In this chapel, you can see the only stained-glass window from the original 15th-century church. Its pattern-weld background is typical of this period.
Finally, as you arrive at the choir stalls, you will notice an opening on the right-hand wall, where the Savoie family would attend mass.
Until the middle of the 19th century, the church was divided in 2 by a jube – a monumental cloister separating the monks in the choir from the nave, where the public sat. This cloister would be made of large archways, closed by wooden doors (which were only opened for important ceremonies). Above are scenes from the life of Christ, sculpted in the stone and painted. This jube was dismantled in the 19th century, as there was no use for it once the monks had left. The haut-relief sculptures have been preserved and placed on the walls of the choir.
Let's begin examining the jube on our right, starting with the first fragment, where you can see the ‘Annunciation’, the 'Annunciation to the shepherds' and the ‘Adoration of the Magi'. The second piece presents 'Palm Sunday', with Christ on the donkey, followed by the Apostles.
The third fragment is comprised of two scenes: 'Pentecost’ and ‘The Incredulity of Saint Thomas'. The wall presents three scenes from the life of Christ after his resurrection: ‘On the way to Emmaüs’, 'The Three Marys at the Tomb’ and 'Descent from the Cross’. The sophistication of the sculptors' work can be seen in the hauberk (coat of chain mail) of the two soldiers asleep at the opening of the tomb.
To finish, you will see ‘Christ appears to Mary Magdalene’.
opening
All year round, daily between 9.30 AM and 6 PM.
Monday to Sunday: 9:30am - 6pm.
visit
information
Village centre
prices
Free of charge

Gardens of the Priory

Gardens of the Priory
Magnificent English-style and French-style gardens.

The Priory and its Formal French Garden

The Priory and its Formal French Garden
This Cluniac Priory founded in the 11th century consists of a Gothic church, a Romanesque crypt and monastic buildings and gardens arranged around a long avenue.
Guided tours only.