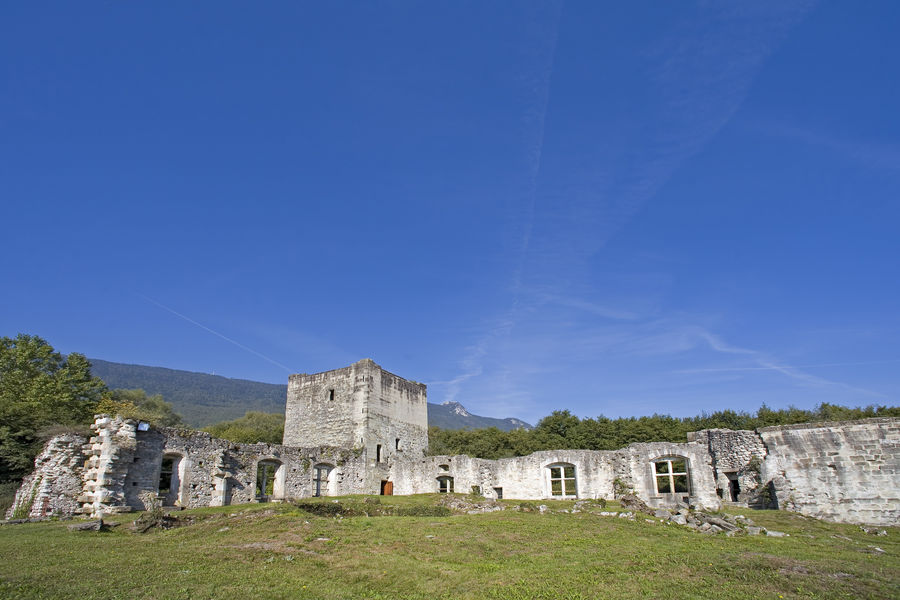 The Château was originally a simple hunting lodge built on land purchased from the Prieuré de Bourget in 1248 by Thomas II de Savoie, the Count of Flanders and Hainaut and the Count of Piedmont from 1244 to 1259.
We do not know much about the development of the building before the renovations carried out by Count Amédée V at the end of the 13th century/beginning of the 14th century. A new building mentioned in 1292 was possibly built during that time. Contributing artists and artisans from other counts' châteaux, notably Chambéry during the 1st half of the 14th century, also carried out various projects.
The four-sided structure with four towers seems to have been built during the period of Thomas II or under Amédée V, count from 1285 to 1323, who was born in this château.
Le Bourget was one of the preferred residences of the itinerant court of the Savoie family until 1427: decoration and refurbishment projects linked to them during the 14th century confirms an intense programme of trips, family and diplomatic events by the count’s court, according to the chronicles of Savoie.
The château became a vassal of the Seyssel family in 1438, but burned to the ground in 1456. It is likely that it was not rebuilt, as a Martellange china ink design shows it in ruins at the beginning of the 17th century. However, it became a vassal of the Nemour family in 1524, Berliet de Chiloup in 1589, then Buttet d’Entremont in the 18th century. Sold in 1841, the buildings were used as a stone quarry until 1849, before being bought by the commune in 1979. It was classed as a Historic Monument in 1983.
The four-sided tours, designed for domestic use, demonstrate the château's residential function. There is no place for specialised military architecture (control of the Col du Chat by the Château de Bourdeau, where the Seyssel family lived).
The unusual position of the towers is potentially due to the extremely marshy terrain, with residual glacial mounds and/or due to its clear residential function: count's lodgings, château owner lodgings, welcoming family vassals.
Like all prestigious buildings, the Château preserves some aspects of military architecture, but was largely defended by the marshes (tower, door with drawbridge, moats, walls): it is largely a remarkably comfortable, civilian building.
Thus, during the second half of the 14th century until 1389, the Château was reinforced with wooden brattices (elements overhanging the wall, which allowed you to throw objects at your attackers), and building or strengthening defensive walls (not connected to the towers). However, these defensive modifications were accompanied by improvements to the windows, thus indicating the residential role of the château. The internal buildings are connected to the towers and are arranged around a courtyard, within the outer walls. Their function is unclear, but they have various floors, with clearly developed residential and state rooms. The environment of the château is decisive but largely unknown.
Since July 2012, a new museum has been built in one of the towers to display the flora and fauna of the lake as well as the conservation of natural habitats. This area is managed in partnership with the Municipalité du Bourget-du-Lac, the Conservatoire d'Espaces naturels Savoie and the Tourist Office.
facilities and services
opening
From 06/07 to 29/08/2021 between 2 pm and 6 pm.
Closed on Monday.
visit
information
Lakeside or by stretch of water
prices
Adult: 2 €.

Free entry for children accompanied by an adult.
means of payment
convenient

Easy-going walk: Château Thomas II
A contemplative walk, suitable for all-comers, that takes you on a discovery of the wetlands, the fauna and flora of the marshes as well as Château Thomas II, a former 13th century hunting lodge.

The Priory and the Château Thomas II